On November 21, Professor Tang Zhongmao, professor at the School of Social Development at East China Normal University and researcher for the National Institute for Inheritance and Innovation of Chinese Culture, gave a talk on the Temple-town Relationship and Everyday Life in Jiangnan (the Area South of Yangtze River) through a folklore study perspective.

Before moving into his main arguments, Professor Tang introduced the relationship between research on Chinese Buddhism and the background of folklore studies. According to him, after Buddhism was introduced to China, its thoughts and systems underwent deep Sinicization, with Chinese characteristics imbued in Buddhism ever since it entered daily life. There is a significant difference between the popular understanding of Sinicization and the way that researchers approach it, a gap which can be traced back to the reflection of intellectual history. Professor Tang suggested that we should keep a watchful eye on how most Buddhist practitioners live. How do they understand Buddhism? And how does Buddhism construct their everyday life? 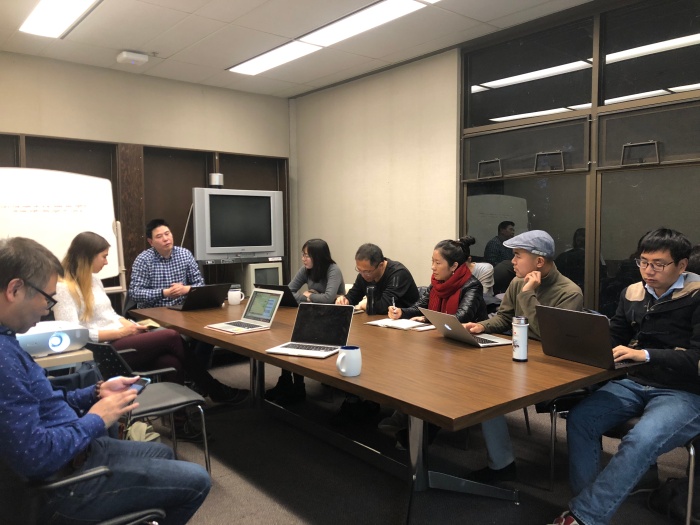 Professor Tang began the main body of his talk by explaining the conceptions of “temple,” “town,” and “Jiangnan”. He stressed that there are different understandings of Jiangnan across the broader cultural context and the geographical context. For the purposes of his talk, Jiangnan refers to Taihu Basin and the middle and lower reaches of Yangtze River, in particular, areas such as south Jiangsu, East Zhejiang and Shanghai.

According to Professor Tang Zhongmao, there are four different types of relationships between temples and towns. Some religious sites develop around cities, such as the Catholic Church in Rome. On the contrary, there are “Holy cities” formed by religious activities and a theocratic system. For example, Lhasa, centered on Potala Palace and Jokhang Temple, is a symbol of the holy urban space during the Tibetan Theocratic Period. Another kind of temple-town relationship is constructed by immigration, through which extraneous religions and religious architecture begin to influence and reshape the urban life. Professor Tang also briefly discussed the phenomenon of towns developing around temples under the productive geographical environment in Jiangnan.

After comparing several possibilities for the formation of new towns. Professor Tang shared his interesting findings with the audience. He found that although the interaction between religion and economy is of great significance, it is often overlooked. To support his argument, Professor Tang presented a number of towns that named after temples, such as Guangfu Zhen（广福镇）, Panlong Zhen (盘龙镇), and Nanxiang Zhen (南翔镇). In the late Southern Song Dynasty, especially in the Ming and Qing Dynasties, it was a common phenomenon that a town or a city was developed around a monastery and was renamed after it.

Elaborating on these materials, Professor Tang showed the audience some kinds of relationships between temples and towns. After introducing the background of human-environment relationship in Jiangnan, he gave an explanation for these phenomena from the perspective of folk economics. In his opinion, depending on the folk economy which was led by numerous Buddhist believers, temples in which Buddhist monks and nuns lived became a belief center and living space for all segments of society, including Buddhist believers, lay Buddhists, common followers, merchants, craftsmen and even artisans. Temples or nunneries, which originally belonged to religious sites, became places of entertainment and daily life. People went to temples to pray and worship, as well as to live, eat, date, or bathe. Centering on temples, “the economy of temple incense” gathered more and more followers and attracted merchants. Under these circumstances, small towns and villages developed.

To better illustrate this process, Professor Tang detailed a typical case. He introduced Zhenru Temple（真如寺）and its location. In his opinion, the folk activities in Zhenru temple contributed to the market’s formation. After fully forming, the market eventually developed into Zhenru town. The location of the temple played a key role in the process in which Zhenru town developed around Zhenru temple. Apart from this, Professor Tang stressed the historical evolution of Zhenru temple fairs, through which the space of Zhenru town extended.

As Professor Tang argues, the process of “towns developing around temples” also indicates the formation of public living space. The phenomenon was further enhanced by campaigning with temple fairs, which is also a platform for cross-border belief activities, giving people a chance to interact and communicate. As part of his lecture, he showed the audience many wonderful photos of temples activities such as temple fairs, precious scrolls（baojuan 宝卷）, recitation, and folklore performances. These photos demonstrate that temples also act as a public living space in Jiangnan in present times. Professor Tang concluded with an argument that the interactive relationship between Buddhist elites, lay Buddhists, and common Buddhist followers should be accepted by Chinese Buddhist history, because it represents one of the most important aspects of Chinese Buddhism.

I am a visiting Ph.D. student in the Department of Asian Studies at the University of British Columbia and a PH.D. candidate in folklore studies at East China Normal University.I'm interested in Chinese Buddhism and folk religions, cultural exchanges of Buddhism in Maritime Silk Road. I intend to expand the research on the relationship between Buddhism and folklore. View all posts by Jing Le

This site uses Akismet to reduce spam. Learn how your comment data is processed.

Join Us on Social Media

Join Us on Social Media